8:13 - Camera setup and the groundbreaking scene,

23:38 - cubes - focus on one building shattering, layers of secondaries and layering dusts,..advantage of outline 'cage' , why not simulation of geometry renders, shape sizing .. 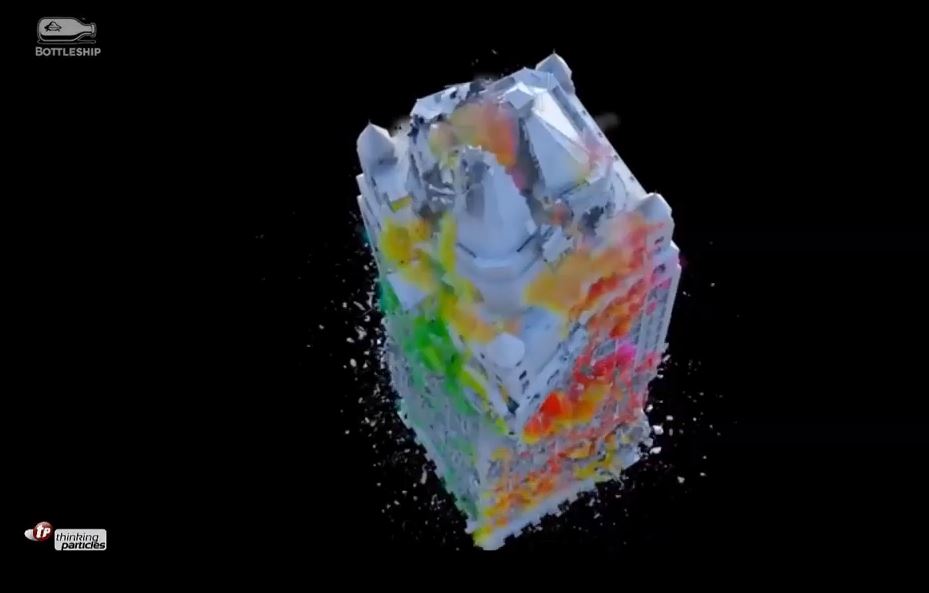 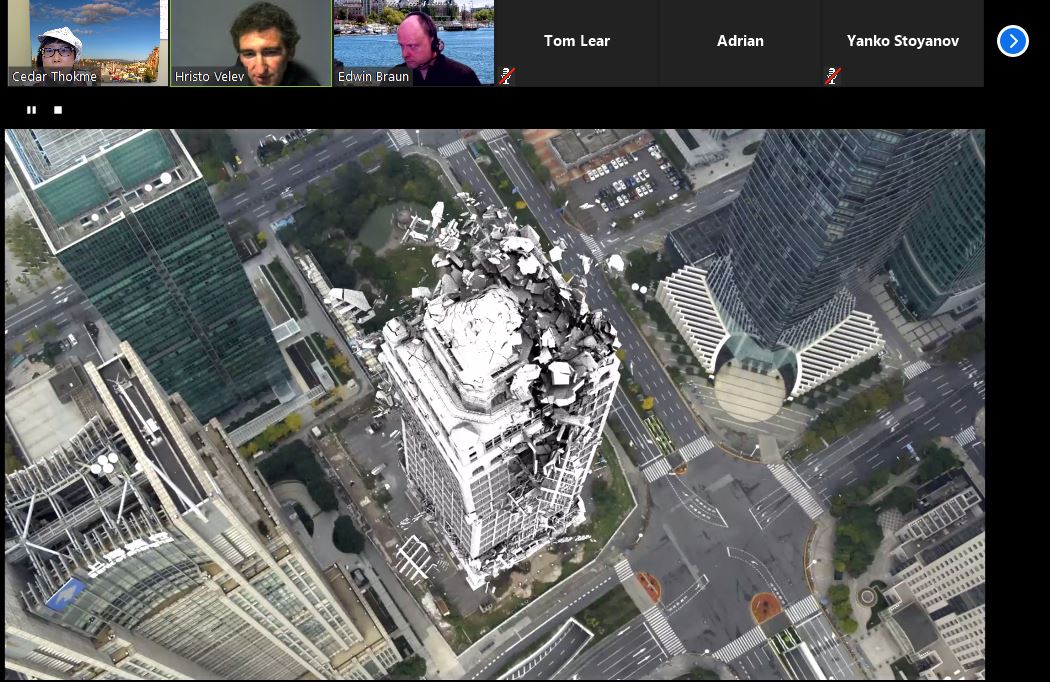 32: 52 - exploration of Cubes and ways of creating different building shapes targeted for destruction - falling effects, pre-fragmentation : creating realistic effects of building eroding from underneath, buildings colliding effects.. 34:22 from simple shapes to creating guides for collision/fragmenting five main building shapes, and no sim with the non-colliding buildings .. 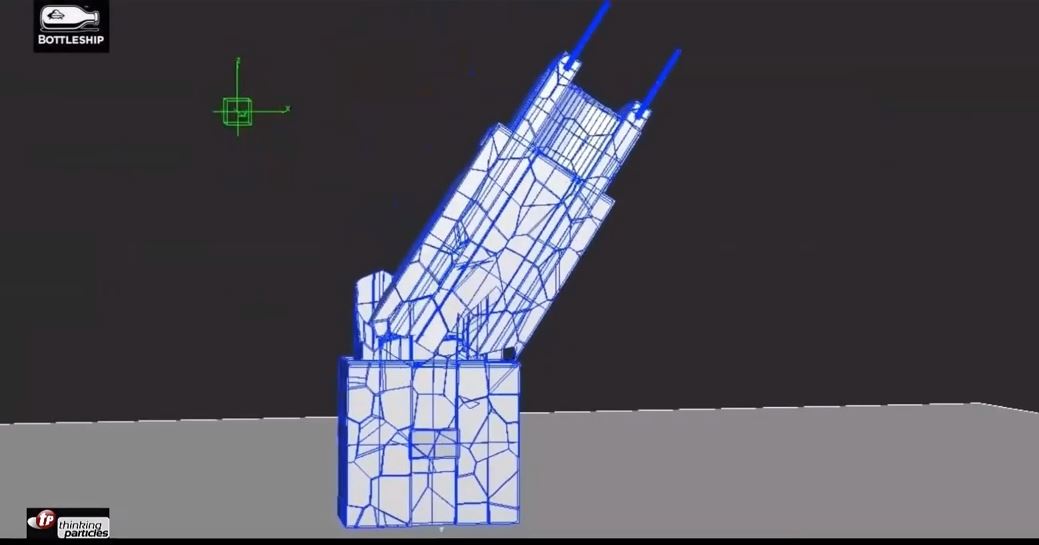 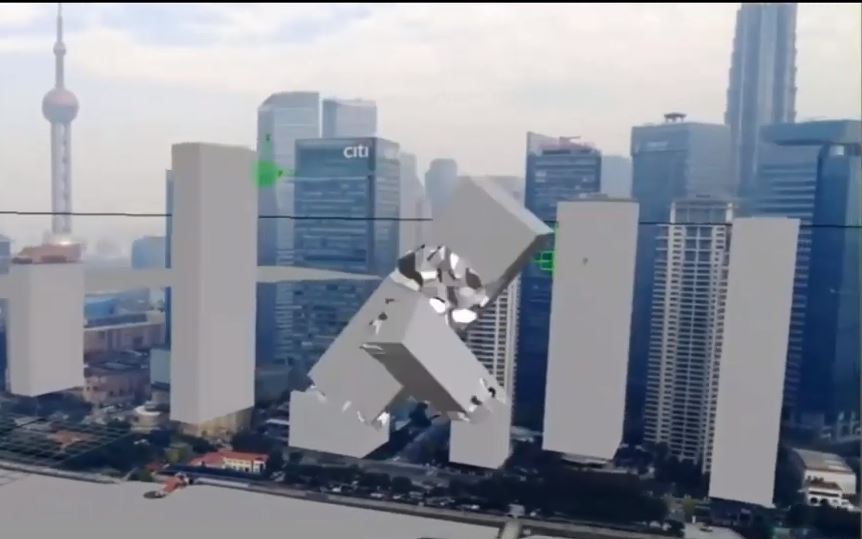 35:05 - an interesting building collapse - creating an 'unzip' splitting in the middle effects 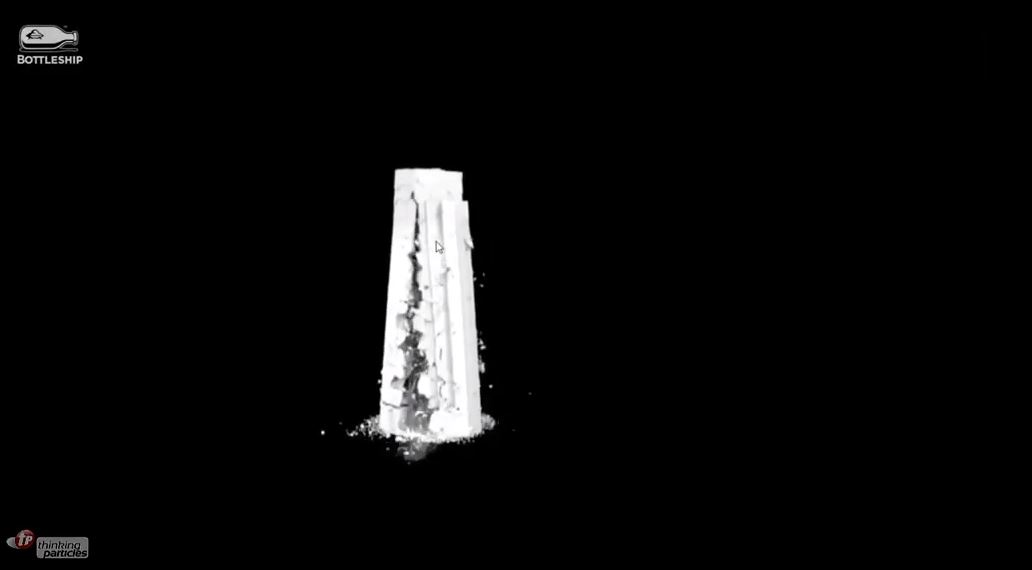 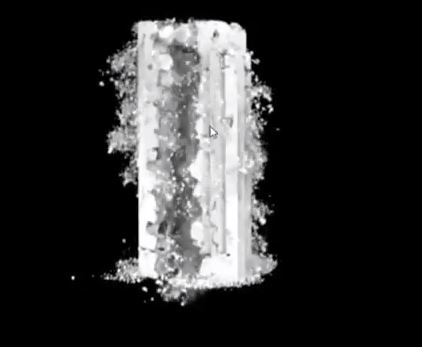 37:30 - Hristo addresses webinar question pre-cut and fragmenting...advantages of VB and then ShapeNoise - making points at edges for further artists refinement of geom, 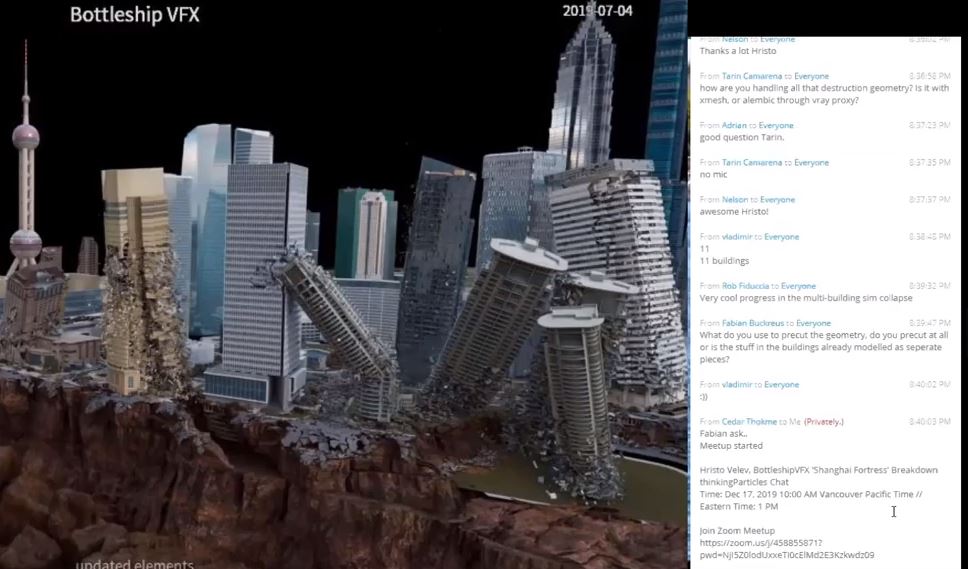 40:46 - the ultimate epic scene for Shanghai Fortress - alien mothership nuclear explosion - creating the large 500-frame shot of 'nuclear explosion' energy beams - illuminating the scene in a night field (Hristo Velev described it as a MONSTER of a SHOT!) - demolition of the cityscape excluding front buildings (plate) everything else were CG - figuring out how to maintain an interesting 500-frames shot -

43:50 - Aftermath of the explosion scene - cityscape - a little bit of work here with emphasis on the volumes than the RGB (bandwidth-saving) since structures were in place from previous destruction assetes.

44:30 - focus on alienship explosion: fine-turning resolutions and slicing - a single simulation moving thru a kind of expanding 'corridor' and created a 'star topology' with the sim - rotate and offset slightly - spinning and a hedgehog motion: multiply sims and maximize over the cityscape scene effects. 45:54 - several sims were build for the RINGS of the explosion.... 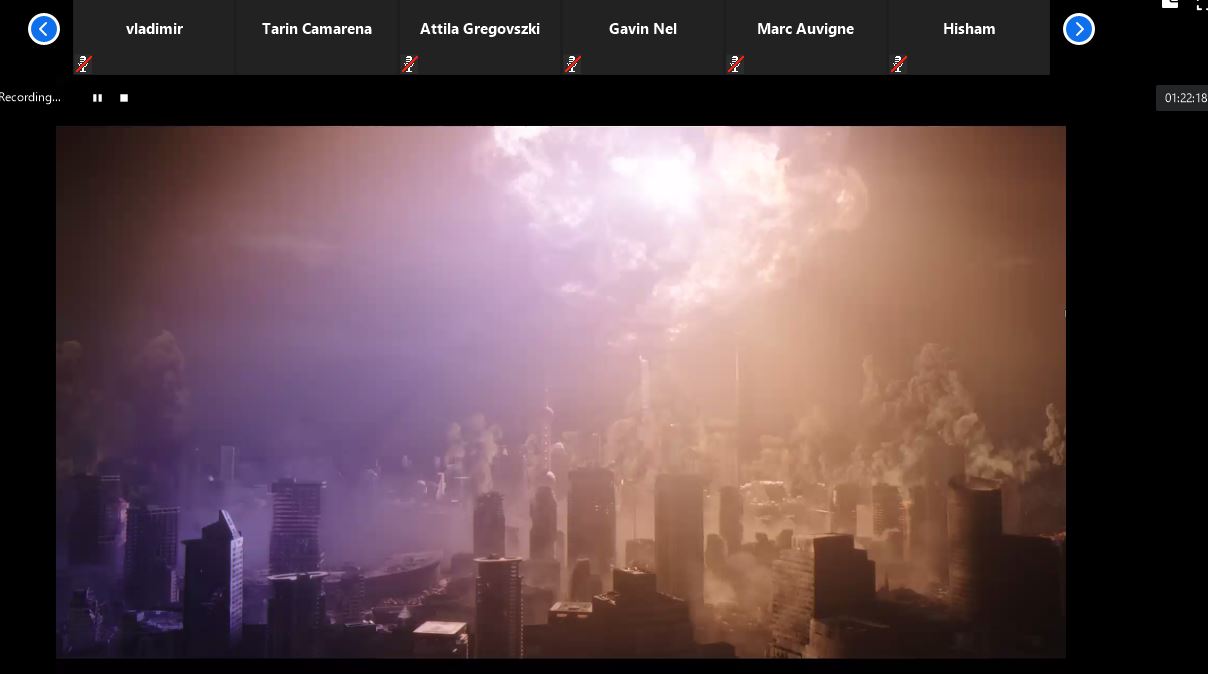 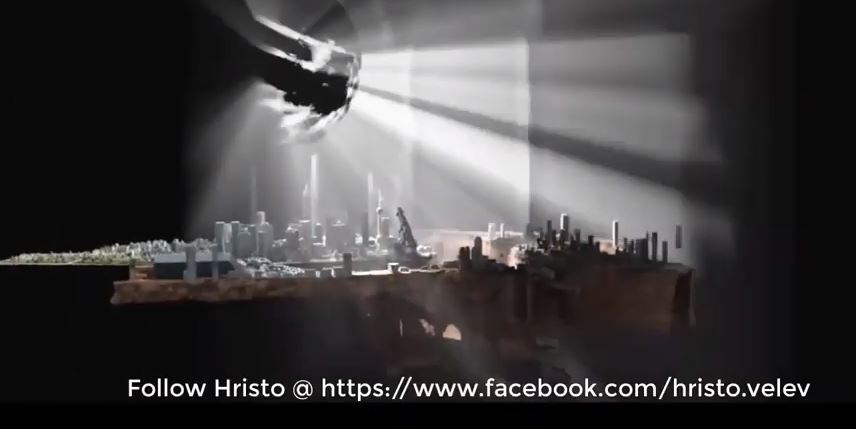 47:23 - added smoke sims - smoke noise collisions and velocities for the 'shapes'. And also, the 'scorching heat' over the building as they get seared from the mothership explosion, like a heat aura around the buildings: 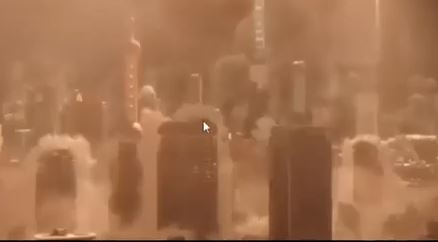 For the latter half of this amazing Meetup about BottleshipVFX FX breakdowns, please refer to the video. You can also view it on Youtube
Get thinkingParticles now! Educational licenses available upon request : info@cebas.com

A Superb Big Thank you to Hristo Velev & the Bottleshipvfx Studio for the insights and scene breakdowns, Big thank you especially to Hristo Velev for this amazing Meetup. Watch for the cebas-BottleshipVFX next - ' WAR ' Bollywood Meetup. 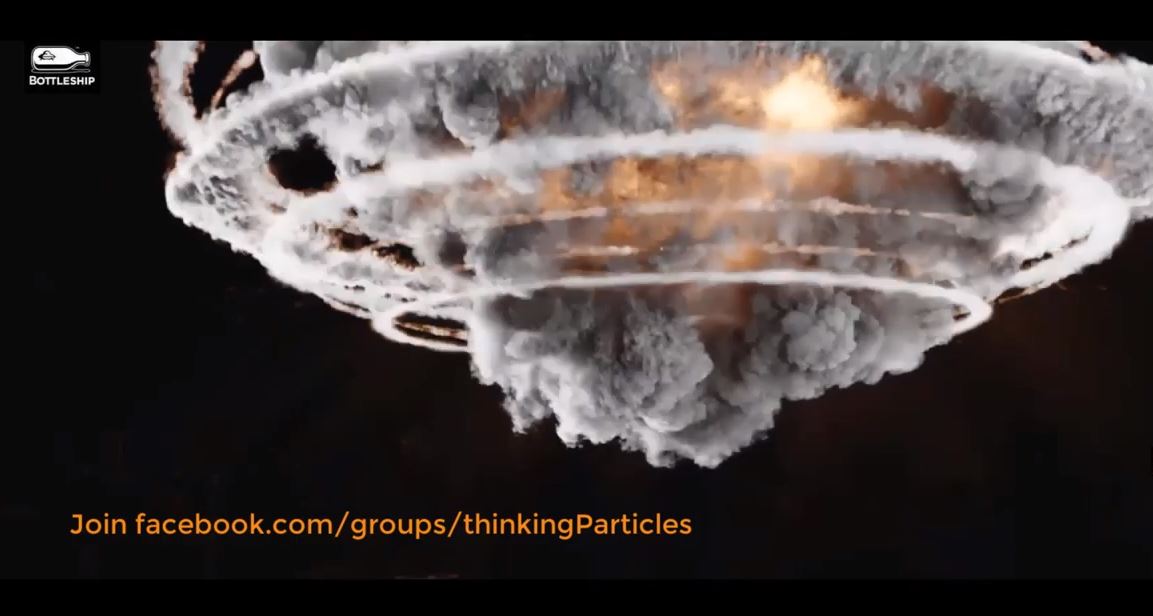