When the Rubber Meets the 3ds Max VFX World

Cebas Visual Technology Inc. is excited to announce, for immediate release, its latest version of thinkingParticles for 3ds Max. thinkingParticles 7.1 introduces, as a first to 3ds Max, true physically based Hyperelastic Continuum Mechanics. Its predecessor came with 2 material properties to procedurally simulate physically based Snow and Sand materials. Now, the tool-set has been expanded to include 5 more advanced Material Point Method (short: MPM) solvers, bringing the total number of solvers to 7. This represents a significant addition for all 3ds Max users working in the field of creating advanced fully procedural Visual Effects. 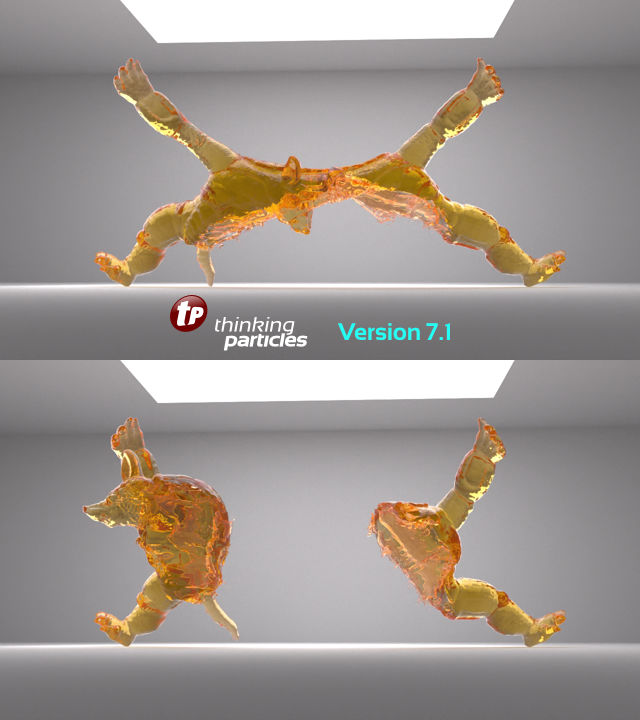 Bring on the Rubber!

thinkingParticles 7.1 offers more than "just" new material simulation properties. FlowMPM, the advanced core material simulation solver has been substantially enhanced in comparison to its predecessor. FlowMPM now offers better cluster-cluster interaction, an increased simulation stability and much better coupling in Multi-Physics scenarios. For example, combining multiple generations of physics solvers will interact in a much more natural and physically accurate way. Pressure and force coupling is now performed based on a virtual surface estimation method, which enhances MPM-Grid to Particle interactions. This means, particles or any simulated liquid can now bounce off accurately from any MPM material simulation.

What else is new?

Find below, a short list of prominent new features.

PRT is one of the widest used particle file formats in the industry. While thinkingParticles could read PRT files since its inception, directly writing PRT files was not possible. A new exporter Node has been developed to solve this shortcoming. This is not only a new Export file format, it also incorporates a very simple to setup and use Partitioning system! Within the PRT exporter Node users can now automatically create particle simulation Partitions with the click of a button.

Tracer is an advanced particle multiplication operator. This particle generator allows the 3D artist to increase the amount of particles in any simulation without actually adding an extra load to the solver. Particles are created "outside" of the main simulation and once created, those extra particles are "dragged" along with their "simulation neighbors". A simple low particle count simulation can easily be turned into a million particle simulation. Thanks to advanced spatial tracking algorithms such up-scaled or up-sampled simulations look as if they were created with a much higher initial particle count. Tracer is the perfect tool to create sand or snow simulations, but it really shines when up-sampling fluid simulations.

thinkingParticles's legendary workhorse SPH hydro fluid solver, received another evolutionary upgrade, making it the best SPH fluid solution for 3ds Max, yet. In its latest incarnation, Flow SPH 7.1 offers an even more enhanced liveliness in its flow behavior. A much faster impulse response allows to simulate splashing fluids and fluid-fluid interaction in a much better, more realistic way. Automatic, physically based surface and below water foam generation has been added and performs now in a much better and more realistic way. Water foam generation is now vorticity based and detects even better the regions of high turbulence and creates foam at the right places.

SimpleDeform - Make it Easier and Faster

Similar to the existing ShapeDeform operator, SimpleDeform uses particles to create procedural, particle based mesh deformations. As the name indicates, "Simple" is a stripped down to the point version of ShapeDeform. Features and functionality are aimed at setting up particle based deformations with a few clicks of the mouse. SimpleDeform is the perfect companion for the MPM solver when simulating Hyperelastic material properties. One outstanding feature is the option to 'rasterize' any surface of an object with particles.

From 3ds Max 2023 onwards, ShowVDB offers the option to display volumes within the viewport as either rendered fog or smoke, wireframe or Voxel representation. This new option enables the 3D artist to actually see what he creates with the help of the most advanced OpenVDB implementation in 3ds Max.

thinkingParticles 7.1 will switch its licensing system to cebas' new LifeLicenser authorization system. In an effort to make licensing more transparent to the user and offer more control and flexibility, cebas LifeLicenser has been created. This new cloud based licensing system allows the user to easily transport, borrow or lend cebas licenses. The cloud based system will authorize thinkingParticles licenses based on the User's account instead of a single hardware locked to a user account. An option to fully export and lock the license to a single hardware still exists, if the user wishes to do so. Using this new licensing system is exclusive to Version 7.1 of thinkingParticles and can not be mixed with older releases.